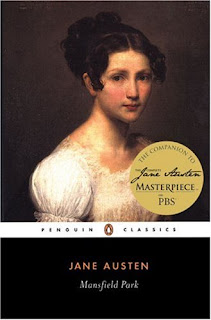 Review:
Simultaneously referred to as the toughest to read, most uninteresting, most controversial of Austen's popular six novels, Mansfield Park is all that and more. The story of good, honest, mildly annoying Fanny Price, moralizing, more annoying, incredibly boring Edmund Bertram is one of an unlikely hero and a heroine, a far cry from the Elizabeth Bennets and the Captain Wentworths of the Austen world. Indeed the two other major characters of Mansfield Park, the glamorous and utterly fascinating brother and sister duo of Henry and Mary Crawford are far more interesting.

However, Mansfield Park is easily the most intriguing of Austen's books, for it tends to be the antithesis of Pride and Prejudice. The setting is so much more grim, realistic, and despite the tongue in cheek commentary and ridiculously brilliant comic interludes in the form of Mrs. Norris, remains a far cry from the unabashed entertainment of Pride and Prejudice. Indeed, the heroine of Mansfield Park is more a Mary than Elizabeth Bennet and it wouldn't be a stretch to compare Edmund's sermons to Mr.Collins'.

For the reader expecting a conventional Austen tale, this is a rather incredible experience: a love story where it is easier to like the 'adversaries' and their charm,wit rather than the protagonists to whom you wouldn't mind saying the Regency-equivalent of 'Please loosen up'.

The Bertrams of Mansfield Park offer a home for their relative Fanny Price, away from the chaos and problems of her own family. Constantly shown her place by her aunt Mrs.Norris, Fanny grows up timid and shy, with only her cousin Edmund to offer her comfort and real care. As the charming Crawfords capture the imagination and hearts of her cousins, Fanny isn't too sure of her feelings towards them.

Much like most of the inhabitants of Mansfield Park, the reader too is likely to be enamoured by Henry and Mary Crawford. Therefore, when Austen sets up the book as Fanny and Edmund vs Henry and Mary, with Henry professing attachment for Fanny as Edmund does for Mary, she plays with the sympathies of the reader. Mansfield Park challenges the traditional notions of a likable heroine and a hero everyone is ready to fall in love with.

I will be the first to admit that reading Mansfield Park wasn't all easy going. While the typical wondrous satire of Austen is sure to keep one entertained, the fact that I wasn't all that emotionally invested in many of the main characters might have dampened my excitement. Like all of Austen's works, Mansfield Park  is eminently quotable:

"But there certainly are not so many men of large fortune in the world as there are pretty women to deserve them."

"A large income is the best recipe for happiness I ever heard of."

"In a review of the two houses, as they appeared to her before the end of a week, Fanny was tempted to apply to them Dr. Johnson's celebrated judgment as to matrimony and celibacy, and say, that though Mansfield Park might have some pains, Portsmouth could have no pleasures."

"An engaged woman is always more agreeable than a disengaged. She is satisfied with herself. Her cares are over, and she feels that she may exert al her powers of pleasing without suspicion. All is safe with a lady engaged; no harm can be done"

As for the characters, Mrs.Norris is an incredible creation of comic genius. Exasperating to the point of calling Mrs.Bennet subtle and restrained, pointlessly wicked and mind-numbingly petty and miserly, she is an unforgettable character. [Part of me thinks that Austen made Edmund marry Fanny precisely because Mrs Norris predicts early in the book that they won't] Deservedly, she finds a place among 100 favourite fictional characters as chosen by 100 literary luminaries. Sally Beauman picked Mrs.Norris and provided us with a spot-on description:

"Mrs Norris in the glittering satire Mansfield Park, is Austen's most profound, subtle portrait of the banality of evil"

Mansfield Park is a rude shock to the reader who has imagined Austen as exemplified by the unforgettable Elizabeth-Darcy romance. Which is what, in my opinion, makes it mandatory reading for Austen fans. You might not adore the book, but it is worth reading for being a brave, unconventional satire. Mansfield Park would also make an excellent book club read, for the simple fact that there is so much to discuss: everything from how on earth Edmund thinks he could '..persuade her that her warm, sisterly regard for him would be foundation enough for wedded love' to what would happen if Mrs.Norris ever knew she inspired an annoying cat.

Recommended reading, to understand Mansfield Park better: How do you solve a problem like Fanny Price? by Lynn Shepherd
Posted by Kals at 11:47 AM

Nice review - this brought a lot back for me. I read this one a few years ago and I remember it was very slow going. I can't tell if that's because it's my least favorite Austen, or if I always forget that Austen's writing is a little denser than more modern stuff. :)

Thanks! :) I agree with you that it is slow going with MP and for most people, their least favourite Austen book. I think Austen's writing stretches a little bit more and if perhaps a modern day editor had her manuscript, they would have chopped off a lot of unnecessary elaborations. Like the long-winding chapters about the play suggested by Tom Bertram.

This was slow-going for me, too... especially the play sections. It's my least favorite Austen, but one I should reread one day.

If you haven't read it yet, I highly recommend Lady Susan. It was an unexpected delight!

Happily I managed to buy a Penguin classics edition that had all three: Lady Susan, The Watsons and Sanditon! I'm looking forward to reading it and hope I shall enjoy Lady Susan as much as you did :)

I'm always struck by the fact that MP was Cassandra's favourite novel. If only we knew more about Cassandra ...

Ah, I didn't know that! Thank you for telling me about this. Makes Cassandra so very fascinating now! I do remember reading that Austen's mother didn't like MP much and thought it dull.

Hi Kals! This is a wonderful review of a book that even Austen fans tend to avoid. While I never think twice about picking up P&P or Emma or Persuasion again, I always seem too hesitate to re-read Mansfield Park. For me, Edmund is the most irritating, he is blind and self-righteous all at once. Mrs. Norris though, is ageless in her "banality of evil." How many Mrs. Norrises do we come across! And personally, I would take the cat ;)

Just when I was thinking that you have gone missing.. thank you for the review and showing that you are alive :) :)

I guess I am THAT charcter who doesn't read classics at all ( I have a fair stock) but I can't seem to get INTO it.

Someday I will have patience and the nerve to read Austen.

But I loved reading your review :)

This is probably one of the less lively Austen books. I didn't find it hard going as such, because Austen writes so well...but Fanny and Edward are so insipid that the book dragged in all those places where they were prominent.

Btw, have you read Lady Susan? That is the complete opposite of this one - an epistolary novel about a woman with little to no scruples - but oh! Lady Susan is so charismatic and witty that I just loved, loved her.

Hello,
Why no posts for such a long time?

Ooh, I've always enjoyed MP, and have read it several times. Perhaps it helped that it was the first Austen I read so wasn't comparing it to P&P etc. I found Fanny fascinating - plucked from all she knew to live somewhere halfway between upstairs and downstairs, never truly appreciated. She showed strength in turning Henry down and was shown to be a good judge of his character. Even Edmund never offended me. Life as a second son must have been frustrating - born with all the advantages of fortune but knowing that once your father is gone you need to work for a living and a much quieter living than what you're used to. And particularly hard when you see that your elder brother doesn't fully appreciate what he's got. He's kind and caring, but foolishly blinded by Mary. The novel may not have the pace of some of the others but it certainly isn't my least favourite. Thanks for the review! I think I'll be rereading the book soon...