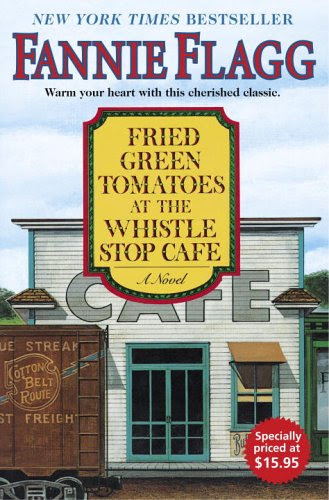 Review:
Believe me, I wanted to adore this book so very much and I would have loved to give it a perfect score. But to be honest, Fried Green Tomatoes At The Whistle Stop Cafe stops from being an epic, heart-warming novel because of its wayward narrative and too many characters. Old Mrs.Ninny Threadgoode tells the story of her life to Evelyn Couch, a middle-aged woman with her own problems, taking both Evelyn and the reader to the unforgettable town of Whistle Stop, Alabama.

One of the best things about the book is definitely how Flagg makes Whistle Stop and the variety of people who inhabited it during the Depression, come to life. Much like Evelyn, by the time you're done reading the book, you feel you know Whistle Stop, its folk, and its popular cafe run by two women Ruth and Idgie, so very well. Flagg writes with great humour, intense emotion and is very quotable. But I had problems with the structuring of the story. It jumps from present to the past way too often, which becomes tedious and drawn-out. The narration of past and present is interspersed with newspaper clippings that add to the tale.

I entirely adored the newspaper clippings. Dot Weems, who writes for The Weems Weekly, is a joy to read and she's my new absolutely favourite character. Sample this bit from her hilarious, personalized, to-the-point articles that reflected the closeness of the society she wrote for:

'Yes, my other half is the same one who went for a ride when we had that hailstorm with hail as big as baseballs and it took us three weeks to get the windshield replaced. He's the same one that got struck by the lightning, fishing down on the river in a rowboat. So the next time you see bad weather coming and you see Wilbur, send him home and I'm gonna put him in the closet and lock him up. I'm afraid a tornado is liable to pick him up and take him on off somewhere...then who would I have to fight with?'

Much like Dot Weems, there are some excellent characters like the feisty Idgy Threadgoode, the adorable Ninny Threadgoode etc. But the major problem that made this book less enjoyable to me was the numerous characters that just kept turning up. There were just too many names and too many people, that I was in no mood to care for them much, because I kept forgetting who was who!

The relationship between Igdie and Ruth was interesting to read, as was the friendship between Evelyn and Mrs. Threadgoode. The novel also tackles themes like lesbianism, racism, feminism. As the novel went on, it was easy to notice that there was no one main plot, but numerous sub plots. Some characters just involve the reader emotionally and there are a couple of absolutely heartwarming scenes that brought me close to tears. But those scenes, sadly, were not too many.

I've heard that the movie has fewer characters and a more streamlined plot in place. Which is a huge relief because the one thing that troubled the book for me was the fact that it took up too much more than it could handle. I've also heard that this is one of those rare instances when the movie is better than the book, and I'm looking forward to watching it!
Posted by Kals at 12:03 AM

I really loved both the book and the movie (I saw the latter before I read it). My favorite part of the book was all those wonderful, southern recipes included. Food is so important to this story, and being able to taste a bit of what they were eating brought the narrative alive in a way unlike any other book I have ever read. Delicious reading!

I am sorry to hear that the book wasn't that good because the movie is lovely. Still I will definitely give this one a shot. Thanks for such an honest review! Didn't you love reading about fried green tomatoes? :)

Alexa - I agree about the delicious reading bit. Food really did play a significant role in the book, be it the food in the cafe or the candies Evelyn buys for herself :)

Vaishnavi - I'm looking forward to watching the movie :) I adore the fried green tomatoes. They kept making me hungry lol.

Hi, this is Jillian from Random Ramblings. I am trying to contact all the blog's followers.. if you could please read my latest post about the blog's technical problems, I'd greatly appreciate it. You can read the post right here. Thank you so very much!

Saw the movie...haven't read the book. Thanks for the review.
Hi. I came across your blog through another blog I follow and have signed up as a follower. When you’re free, please do visit me and let me know what you think of my blog and leave a comment. If you like, do follow as well. I am always open to great new people and interesting websites. Look forward to hearing from you

The movie and the book do have entirely different feels, but I really like both of them. I think the movie packs more of an emotional punch.

Great review! I wanted to let you know that there's an award for you at Kate's Library!

i read this awhile back and really enjoyed it. mostly for the small town feel of it and its characters.

I haven't read this but I adore the movie. It's sad to hear the book isn't just as good.

I always cried when Idgy's brother gets hit by the train...

The movie is definitely better. However, I think I enjoyed the movie more because I knew the story. I can't wait to hear what you think about the movie.

I really enjoyed this book and LOL many times and liked that there was more than the movie. Like the previous commenter, perhaps my enjoyment was enhanced because I liked the movie as well--which I saw first. (gee--I sure used the word like alot :)