This is the eleventh or twelfth time I'm watching this version of Pride and Prejudice and the first time I'm watching it after having seen the masterly BBC version starring Jennifer Ehle and Colin Firth. And I must admit I had a change of opinion regarding some things about the film. I still enjoyed the film, but not as much as I used to. Or is that because I couldn't get cake and had only tea for company?

This film is perhaps the most visually pleasing version of Pride and Prejudice.

The delightful scenery and the enticing sunrise, the glorious visuals at dawn, absolutely divine shots of Pemberley( Yes, the love affair continues. I was gaping breathlessly at the introductory shots of Pemberley. Almost poetic!) The direction was swift, crisp and though some people consider this very precise reason as a drawback, I thought it worked perfectly for a film.


Oh, and thankfully, I watched the British version of the film , meaning I don't have to put up with the cringe-worthy 'Mrs. Darcy' bit.


The Cast: 8/10
This is where I've had a change of opinion. Matthew Macfadyen is still my favourite Darcy- a more passionate, brooding and extremely attractive Darcy, even without a wet white shirt. Just saying.


It's with Keira Knightley where things change. After watching Jennifer Ehle's magnificent portrayal of Lizzie Bennet, Keira's performance seems to me a little bit incomplete. Rosamund Pike as Jane however, is still my favourite, probably because she looks as angelic as Jane is supposed to be.

The chemistry between the leads is quite perfect. Especially the scene, which you can view here, where Darcy holds on to Elizabeth's hand as she sits in the carriage and they glance- an almost electric moment!

The soundtrack of Pride and Prejudice has always been on my list of best soundtracks ever and with every viewing of the film, you enjoy it infinitely more. Two thumbs up for Dario Marianelli! 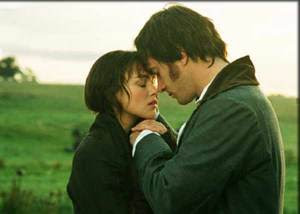 'You have bewitched me, body and soul, and I love, love, I love you.'


Gosh, what is it with that line that makes me love it so much? Is it Macfadyen's voice, or the tender, longing expression, or the fact that it leads to a perfect finale? We're left with a beautiful scene and a wonderful line to savour.

A great watch for an Austenite with limited time. I think if we brush aside the BBC version and have in mind the fact that Pride and Prejudice has to be shrunk and fit into the timings of a film, we would appreciate this film for what it is- a glorious, aesthetically and visually pleasing tribute to Austen.


This makes it 6/12 of my Extended Austen Challenge! Yay, the half way mark! Its been great fun reaching there, thanks to your feedback for the reviews :)

What do you mean NO CAKE?!

Excellent review! I've only watched this one once - can you believe it?
Hurray for making it halfway through your super-challenge.

I really enjoyed this version. Thanks for a great review of it.

Oh, how I love this version! Your review was spectacular as ever!

Thanks a lot Joann, Okie and Gofita! :)

JoAnn, I definitely recommend you watch the film again - it has great rewatch value :)

I just posted my review of the BBC version for this challenge. After hearing all the hype about it and Colin Firth... I was so disappointed! I much prefer the 2005 movie adaptation!

Yes, the movie is not perfect. Things were changed... and the miniseries was truer to the book. But, as you pointed out, the movie was only 2 hours! Some things HAD to be changed to make it work.

Rosamund Pike is so beautiful. She's my favorite "Jane", too!

Oh, and the lake scene with Colin Firth? I totally did not get. Maybe if the shirt had been wetter, I don't know...

I agree totally about Colin Firth, though I very much enjoyed the BBC version too. I guess its probably because you fall in love with what you see first and its tough to change. I saw the 2005 film first and Matthew has, is and will always be the perfect Mr. Darcy for me :)

I think the key is to not correlate both versions too much. They serve different purposes and are great in their own way.

I've reviewed the BBC version earlier too. You could check that out :)

I think it's because I saw the 2005 version first I fell in love with it, and had issues with the Colin Firth version even though it's more accurate. I can't wait to see what I think of the 2005 after re-reading p/p last week.

This is one of my favorite books and favorite movies! I am glad you enjoyed it too. I still think Colin Firth is the best Darcy but I like Keira Knightly as Elizabeth better.

I used to adore Keira as Elizabeth, but seeing Jennifer Ehle made me change that opinion :) It still is an awesome movie though :)

I much prefer the BBC, Firth/Ehle version. If for no other reasons because there is more of it! Plus, although I think the party scenes in the 2005 version and some other period details were more accurate, they seem a little too rough around the edges for my taste. Again this might be a more realistic depiction but I prefer the prettier BBC version.

Ah, I do agree that its such a pleasure to have a lengthier version of P&P, which makes the BBC version invaluable. But for a short yet pleasing adaptation, I love this version :)

yay! halfway through your EA challenge! great review - love the link to the tender hands moment.