This weekly event is hosted by Susan at Rocks n' Reads West of Mars :

She says: " Every Wednesday, write about a book you loved that’s written by a woman. Celebrate a woman author whose books you love. Talk about a book you’re dying to read. " 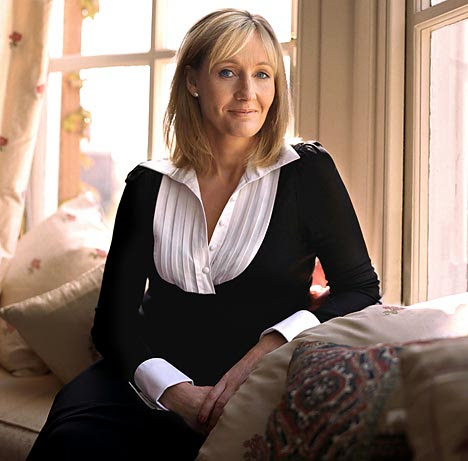 There are some books that are very personal. J.K.Rowling's literary phenomenon Harry Potter is one such  for me. I've never ever debated feverishly about theories and storylines as I have for HP. I've never stood eagerly in anticipation, outside a bookstore during the wee hours of the morning for any other book. I've met loads of people, made great friends across the World, because of HP. I've broken down to tears when Dumbledore died. I've memorized the Black family tree. I've tried to accio things. When I've had bad days, I've read HP as an antidote, as  the best way to cheer up. HP was, is and will always be my biggest fandom experience.

For all that and more, I just can't thank Joanne Kathleen Rowling enough. A single mother, writing a book in a cafe owned by her brother in law, while taking care of her daughter all by herself is quite an inspirational story in itself. That her story turned out to be purely magical to the millions of readers who followed Harry, Hermione and Ron in their adventures and sort of grew up with them, is testament to Rowling's talent. She writes captivating stories, creates varied characters  and builds an entire, multi-layered magical universe in great detail right from the great wizarding sport of Quidditch to Floo Powder to the Misuse of Muggle Artifacts Office to the Nastily Exhausting Wizarding Tests.

Rowling's creative genius is perhaps one of my favourite things about her books. That, along with her immensely quotable penchant for humour, Fred and George style, or sarcasm, Snape or Harry style. Not all the books were as satisfactory as one would have hoped, but there have been more hits than slight misses with Rowling. Rowling's Harry Potter series spurred on a whole generation to get back to books. I've always loved books so that won't apply to me, but I've seen several of my friends run to the library or come home in haste to borrow Goblet of Fire because they've just finished Prisoner of Azkaban and 'cannot wait for more!'


Plus, the underlying theme of Rowling's Harry Potter series has been a beautiful one, that love is our greatest power. A power that can and will prevail over seemingly unsurmountable problems and ordeals. I find that a theme worth reading about. The Harry Potter series is one that I shall definitely pass on to my children, feeling very proud that I was part of a generation that had the opportunity to eagerly anticipate book after book of this magnificent reading experience. Thank you again for letting us be part of your magical world, Ms. Rowling. We're still waiting for the admission letter from Hogwarts though =)

Featured on Women on Wednesday:

I love her because she and I share the same birthday :D

I love how her success was as magical as her stories. Love the Harry books AND how they got the whole world reading the same thing at the same time -- parents and children, together. Now that is incredible!

Absolutely! People of all ages were so captivated by the HP series. It was definitely an incredible achievement :)

Psst...I spotlighted your blog with an award--just because!
Have a great new 2010!