This weekly event is hosted by Susan at Rocks n' Reads West of Mars :

She says: " Every Wednesday, write about a book you loved that’s written by a woman. Celebrate a woman author whose books you love. Talk about a book you’re dying to read. "

The woman I'm featuring this week is as different from the previous authors I've featured on this meme as possible. For one, Nayantara Sahgal is a modern-day Indian writer. Also, unlike Blyton and Alcott whose several books I've read and enjoyed, I've read only one book written by Ms. Sahgal. But if I'm dedicating a post for her, you can imagine how much I love the book.

Prison and Chocolate Cake ( My review is here ), published as early as 1954, is Ms. Sahgal's memoir of India. The struggle for Independence, as seen through the eyes of a young member of the Nehru-Gandhi dynasty is fascinating. Sahgal's mother was India's first woman minister Vijayalakshmi Pandit, while her uncle Jawaharlal Nehru was India's first Prime Minister.

But it's not on the worth of the famous family name that Sahgal's book sells. Her writing, as seen in Prison and Chocolate Cake, is deceptively simple, gloriously witty and wonderfully Indian.


Nayantara Sahgal says, "I am a novelist and a political journalist. My novels have a political background or political ambiance. I didn't plan it that way—I was dealing with people and situations—but looking back, each one seems to reflect the hopes and fears the political scene held out to us at the time. " That's just the kind of mix of politics and fiction that I love  and I'm looking forward to reading several of works! 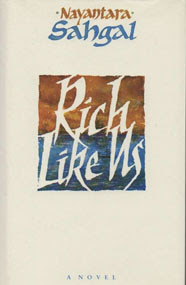 This Time of Morning

Also on my list is Sahgal's non-fiction book about her cousin and former Prime Minister Indira Gandhi, of whom she was always very critical: Indira Gandhi : Her Road to Power

I cannot vouch for the greatness of any of these novels that I haven't read yet. But Prison and Chocolate Cake is a must-read for every Indian and to anyone interested in the freedom struggle of India.


Featured on 'Women on Wednesday':

I have to read this book then..Seems like a lots of books for me for the coming year. I love this weekly feature :)

I'm sure you'll love it :) Thanks! I enjoy posting this weekly meme :)

I love memoirs, and I haven't read any that I can think of from India. I've also been keeping an eye out for books from writers around the world for the Orbis Terrarum challenge, so I'll definitely be keeping this author in mind.

That's great! She's quite a brilliant writer and her Prison and Chocolate Cake is a deeply personal memoir which I'm sure you'll like =)